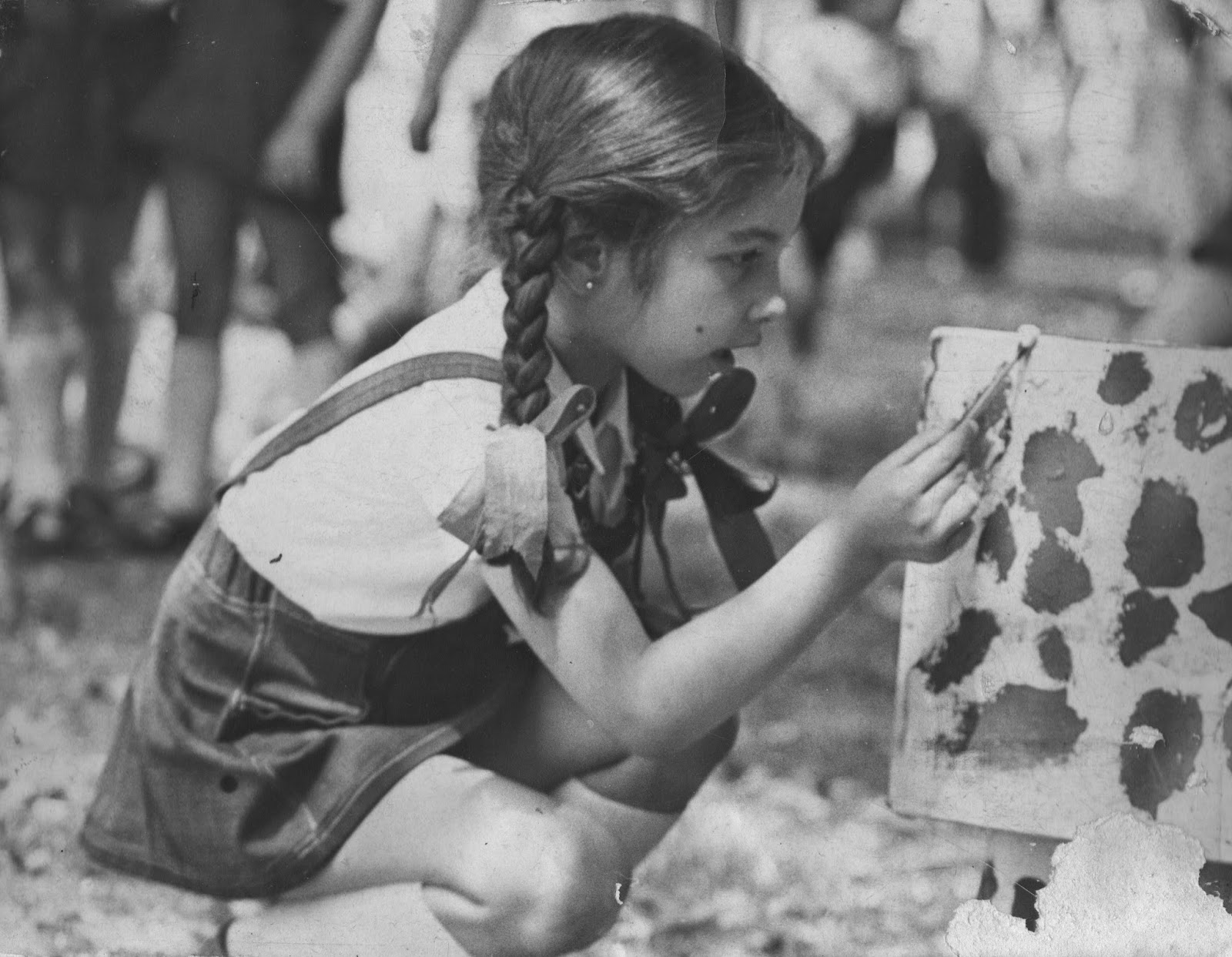 The picture that appears in this post is one of my mother’s favorites. But not mine.
It seems like a photo taken at the time that I was performing an activity that had me so entertained and engrossed that I did not realize that someone was there to portray me. It's exactly the opposite. The school decided that for that year’s picture day, instead of posing facing the camera with brimming smile, we were going to pose like we were doing an art activity. So for that picture, they took us to the garden where that giraffe that appears in the photo was already set for the farce, completely painted and finished, none of us had nothing to do with its realization. If you look carefully at the background of the photo, you can see the little legs of my classmates, as we were in line, waiting for our turn to play the role which was requested of us.
Although I was only five, I can remember the frustration I felt. What was the point of representing something that was not true? Why were we made partakers of a lie?  Many things bother me of that particular moment: the falsity and its premeditation, the deceit to our parents, the skills of the –private--school in the manipulation of us as kids so it could continue charging tuition, but what bothers me the most is that never, not even once, did we do an art activity even remotely similar to the one shown in the picture--and I would have loved to do so. I remember as if it were yesterday, the excitement I felt when, for a few seconds, I grabbed that brush with dried paint. How I wished that all this performance would have been true! How much I would have enjoyed painting that giraffe! Then, joining my mother, I would consider that picture one of my favorites.

To my mom
In one of the seminars that I have taken during my studies for a PhD, I have had the pleasure of reading the thesis “Los saberes docentes de maestros en primarias con grupos multigrado” by Paola Martínez Arteaga, which was recognized by the Consejo Mexicano de Investigación Educativa (COMIE) as the best master’s thesis in Education for the 2009-2010 biennium.
As its name implies, multigrade schools are those in which a single teacher works simultaneously with students from different grades. Because multigrade schools are typically in rural areas where greater marginalization is found compared to the urban areas, they have been seen as schools of lower quality or even incomplete schools, considered as an educational project tending to disappear, when the reality is that multigrade schools are found throughout the world, both in developed countries and developing countries; for example, in Spain they represent 23 % of all the primary schools, in Ireland 40%, in England 25%, in France 22 %, in Finland 32%, in Peru 73 %, in Colombia 45%, in Brazil and Guatemala 50%, in China 36%, in the U.S. 17% and in Mexico 48%.
The reading of this magnificent work reminded me of a chapter in my life that I had, or thought I had, forgotten:
When I was little, my mom told me that her first job as a newly graduated teacher was in a multigrade school in one of the many villages of her home state of Yucatán. She told me that she had to learn how to drive an old and wrecked jeep that she borrowed so she could cross the jungle and teach indigenous peasant students how to count, read and write. These students had to get up at 4 or 5 in the morning to work alongside their parents in the difficult tasks of the field, which invariably caused them all to be exhausted and dehydrated by 10 in the morning.  My mom, foreseeing this, always brought fresh water to share. However, her undernourished and sleep deprived students made a real effort to be there so she had to figure out every day not only how to keep them awake and interested, but also teach them. At that time in my young age, I could imagine my mother young and luminous, as she still remains, with her cotton dress and her desire to fulfill a task that even at that moment I could see as extremely difficult and complicated. I've never told my mother, although she’ll be reading it now, that when she told me this, I visualized her in my mind as a true heroine and I felt a deep admiration for her. Undoubtedly, this experience was one of the things that determined my career choice.
Contrary to the defamation campaign with which some authorities and media try to stain teaching, I think there is no money in the world or enough words of gratitude that can pay for the heroism of all those who have the courage  to work in multigrade schools or other kinds of schools -lacking electricity, water, furniture, materials, etc.-  performing not only as a teacher, but, also, as a secretary, principal, cleaner, father and mother of children who before –way before– taking them to a classroom, you want to give them a good and filling lunch.
My admiration and my respect for all of them.
Publicado por Verónica Vázquez Zentella en 9:40 No hay comentarios: Enlaces a esta entrada

This work is licensed under a Creative Commons Attribution-NonCommercial-NoDerivs 3.0 Unported License.